Irish people feature regularly in the writings of Emma Goldman, the notorious early-twentieth-century anarchist activist and writer. In her autobiography, Goldman talks of encounters with various Irish and Irish-American characters: A policeman with “a luscious Irish brogue” who took a protective stance toward a young Emma Goldman shortly after her arrival in New York; Billy Reedy, the anarchist-sympathising editor of the St. Louis Mirror, who won her over with “his rich Irish humour”; Goldman’s close political ally M. Eleanor Fitzgerald, “Fitzi”, who “charmed people into sympathy and action – not merely by her Irish name and beautiful auburn hair, but by her fine and suave personality. Little did anyone outside of her immediate friends sense the Celtic temperament behind her tranquil manner.” There are also unnamed Irish women to whom Goldman quietly offered advice on birth control and a prison matron with a “good Irish soul” who confessed that she shared Goldman’s anti-war sympathies (“She was Irish, and she had no use for the Allies”).[1]

Much of this, of course, is due to the simple fact that Emma Goldman’s political activism brought her through the multi-ethnic locales of turn-of-the-century America; her encounters with Irish immigrants parallel her work with German, Russian and Yiddish anarchists and radicals in what remained very much a life and politics in non-English-speaking and immigrant communities.

And yet, there are also distinctly political aspects to Goldman’s interests in the Irish, moving beyond these simple stereotypes of warm and loveable Irish rogues. In her memoirs she recounts her political emotions upon hearing about the 1916 Easter Rising: “My sympathies were naturally on the side of the revolting masses and against British imperialism, which had oppressed Ireland for so many centuries.” Extensive reading of Irish literature had given Goldman an affection for “the Gaelic people” and she saw similarities between Irish peasants and Russian mujiks: “In their naïve simplicity and lack of sophistication, in the motif of their folk-melodies, and in their primitive attitude towards law-breaking, which sees in the offender an unfortunate rather than a criminal, they were brothers.”[2] In other words, she saw something of political importance in the supposedly anarchist strains of Irish peasant culture.

Shortly after the Rising, Goldman gave over space to Irish nationalist politics in her Mother Earth journal. As well as an excerpt from Patrick Pearse’s 1916 essay “The Separatist Idea” (here retitled “A Paean of Freedom”), Mother Earth also published an article “On the Death of James Connolly and Francis Sheehy-Skeffington” by the poet Padraic Colum. In this piece, Colum sought to explain Irish politics to a presumably radical-left readership. Focusing on the executions of these two leftist figures, he implied that the Rising was an essentially anti-capitalist act. And Goldman’s editorial for this issue was bold in its pronouncements for where the Rising would lead, with anarchist politics very much to the fore in the predictions:

“The Irish revolution may grow in significance and importance in the near future. The rebels of Dublin may become the advance guard of an international social revolution, which will shake the very foundations of all governments and privileged classes, who have thrown humanity into the hell-fire of this war. The bold spirit of the Irish rebels, their hopes, sufferings and martyrdom will certainly arouse the masses of European and American peoples. It will be realized that they fought and died for more than a mere national issue, that their noble example and sacrifice worked like a trumpet call and storm signal to all the oppressed of the earth.”[3]

The following year, when Goldman began the campaign against American involvement in World War One that would eventually lead to her arrest and deportation, she was joined at one anti-war rally in New York by “the distinguished Irish rebel” Hanna Sheehy-Skeffington: “A lover of peace and an eloquent pleader for freedom and justice, she was a sweet and gentle soul. In her was personified the spirit of our gathering, the respect for human life and liberty that was seeking expression that evening.”[4]

A less generous assessment of Irish politics, though, was made in an article on “The Echo from Erin”, written by an associate of Goldman’s, Warren Starr van Valkenburgh, which appeared in the July 1916 issue of Mother Earth. While still taking aim at the “barbarity of the British Empire”, van Walkenburgh stated that anarchists should have “scant sympathy” for “any attempt to change the form of coercion to a home government”.[5] Rather than romantically praising the desire for “freedom” of the Irish rebels, van Walkenburgh argued that they had misunderstood the very nature of freedom as well as the limits of freedom under a conventional capitalist state. 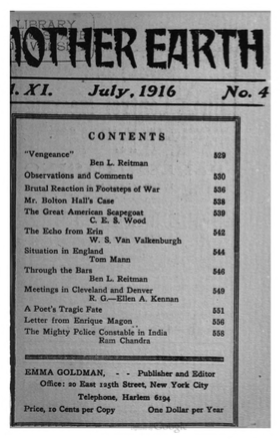 There is one other interesting encounter between Emma Goldman and “Irishness”. In one of the later chapters of her memoirs, she recalls the problems that emerged with an odd follower of hers named Herman Mikhailovitch. A long-time subscriber to Mother Earth, Mikhailovitch began to follow Goldman across the United States, popping up at her public lectures in Omaha, Seattle, Spokane and New York. A free spirit as well as a kind of anarchist groupie, Mikhailovitch became known, alternately, as “Herman the Hobo” and “Mickey”. Goldman’s then-partner Ben Reitman, himself something of a wanderer, took “Mickey” under his wing and promoted him as an exemplar of a hobo lifestyle freed from capitalism. The press duly eulogised “Mickey” as “the Irish Jew who had taken a pledge never to work.” (Though it’s not clear if he was actually Irish, or just presumed as such because of his adopted name). The attention apparently enflamed Mickey’s ego, making him even more of a nuisance to Emma Goldman. He soon pledged his love for her and threatened to kill himself if Goldman did not reciprocate. Despairing of this unwanted hanger-on, one of Goldman’s comrades, Bolton Hall, informed “Mickey” that he had reported him to the poorhouse authorities who would look to commit him on account of his indigence and poor mental health. “Mickey” quickly left New York. In a subsequent letter to Hall, “Mickey” declared that not only has he moved to the west coast of the United States, but he is also a surprisingly wealthy man. After this, this obnoxious “Irish Jew” seems to have completely disappeared from the historical record.[6]